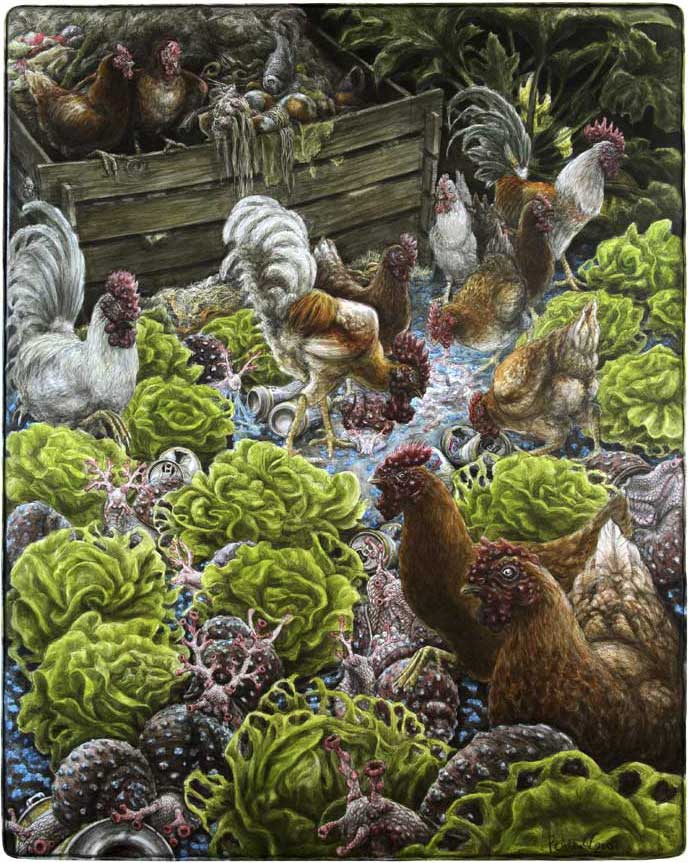 Exhibition with paintings, illustrations, sculptures, and ready-mades by Felix Pestemer at the gallery bobparsley. The works document the decay of everyday objects and the impact the conscious and unconscious actions of modern society have on the environment.

But what the hell is neophyte plasma? 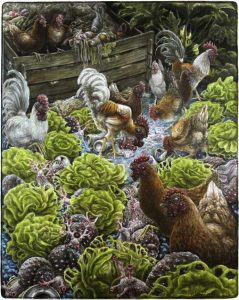 Our concept of nature has run its course: Since the Stone Age, we have been creating art as well as ecological catastrophes. Maybe the latter are the epitome of civilization itself. But even if paradise and the primal state as defined by Rousseau never really existed, the romantic ideal of a landscape remains firmly ingrained and intact in our brain stem, looking like the projection of the habitat of the first australopiticus. The failed model version of that projection can be found in Humanity Park, in the Biosphere II, on Tropical Island, and in all center parks: selected excerpts or even holograms of reality, sprung from a dialectic understanding of the world. Normative and actual. What a proto-religious alliance between the natural sciences and the domestication of nature that is! You may chase this ideal forever – until you are simply outrun by death. Apropos death. It can in fact be seen as another indicator of how our concept of nature is failing. The notorious blanking out of impermanence – and thus of many circular and generic principles of nature. As if there is no residuum at all. As if the main target is to take a blossom at its peak and to preserve it in artificial resin. As if we were all immortal. It would be such more advisable from a therapeutic standpoint to acquire in good time a taste for a panorama of the cultivated landscape that is in sync with our way of living. It may not always look beautiful, but at least it is authentic. We talk about a turnip field or a garbage dump. Or maybe just about a small grove of beeches.

The idea behind “Neophyte Plasma” is to shift our demands and our aesthetic preferences, even our whole perception. Injected into our spinal cord, it will spread with lightning speed to the cerebral cortex. This will have massive repercussions: We suddenly are not afraid of failure anymore – we have simply passed that state already. We like the things that are growing, but we enjoy the things that are rotting just as well. Even garbage and dirt are now popular (“Look at this, I made it myself!”). The rare things can delight us just as much as the mundane things, the inconspicuous at times even more so than the precious. We may get excited for hours about something that is extremely ugly. In high sprit, we are tilling the soil of the salad patch, after we have cleared away the beer cans left after last night’s bout. But now the soil is contaminated, all snails have been killed off. Our lettuce has been eaten away nonetheless. Meanwhile, gigantic fourteen pointer molluscs are dominating the scenery, mutants for which no pesticide has ever been created. The heck with it, we have learned to share. Just the light blue coloring of these monster snails serves as a reminder of the old times when our aunt Emmy used to drop slug pellets like there was no tomorrow. Even our rooster Max has turned light blue as a result – as well as noticeably unaggressive. He is only killing as many fourteen pointers as he needs for his daily survival. 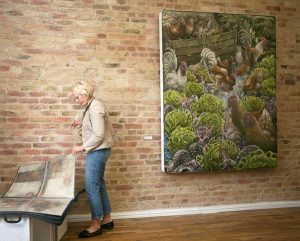