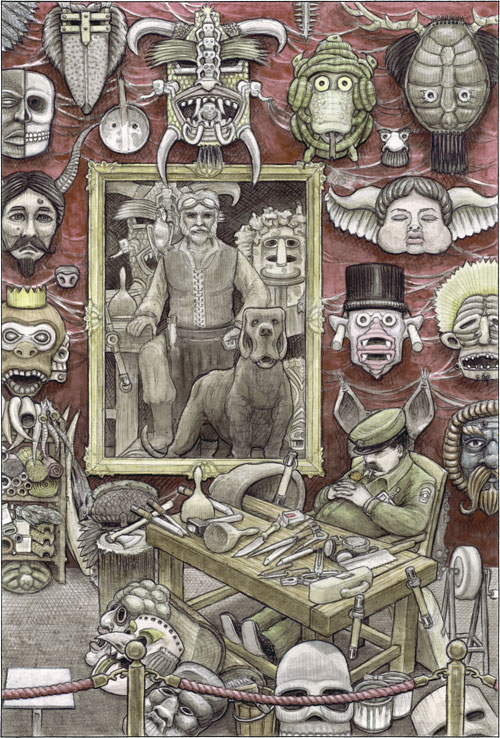 A Graphic Novel about Death in Mexico

Book Release and Exposition of Original Drawings of “Polvo – Day of the Dead” at Epitaaf, Centre for Funerary Culture in Brussels

On the 1st of November, Epitaaf opens the doors of the former tomb maker workshop ‘Ateliers Salu’ for the presentation of the graphic novel ‘Polvo – Day of the Dead’: A brand new story by Felix Pestemer on an old and ancient theme. For ages, Christians around the world have been commemorating their beloved deceased on All Saints Day. As we shall see, the Mexican “Día de los Muertos” is celebrated with exceptional enthusiasm, creativity and – yes – lightness. ‘Polvo’ (Dust) presents a culture in which death is not a taboo but has a place in everyday life, a culture celebrating the dead and making skeletons dance. 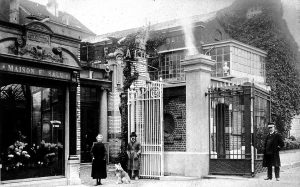 The Ateliers Salu in the 1920s

Just next to one of the oldest cemeteries of Brussels, Le Cimetière de Laeken, Epitaaf, an association of volunteers, is caretaking of the former Ateliers Salu, where three generations of artists created magnificent tombs for thousands of families. Around the first of November of almost every year, the building is open to the public. And many visitors are astonished by the dense atmosphere and the aura still emanating from this place. A thin layer of dust, a patina of memory covers what seemingly has not been moved for decades. Hopefully, this will soon become a Museum of Funeral Customs.

Although the emphasis of Epitaaf´s activities lies on the preservation of things from the past – the old atelier, the cemetery, its neglected tombs, and cemeteries in general – the association always welcomes new and original ideas. And it would be difficult to find a place (outside Mexico) and a time more suitable for presenting a book like ‘Polvo’ than the Salu family’s domain on the 1st of November. 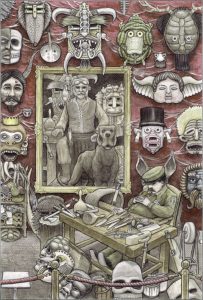 The Mask Museum in ‘Polvo – Day of the Dead’

The story of ‘Polvo – Day of the Dead’ also begins and ends in a former artist’s workshop. We are introduced to the legacy of the (fictive) Mexican mask carver José Guadalupe Rojas: his workbench and antique tools; an oil painting portraying him with his dog Valiente and the parrot Pepe; and last but not least the innumerable masks he created in his lifetime – on the whole a nostalgic collection of memories.

But what does remain of these memories over the centuries? What route leads from the former workspace to the mask museum and to the museum of funeral customs, respectively? Or will everything end up in an anthropological collection? And what comes afterwards? ‘Polvo’ is dedicated to such thoughts about evanescence and treats the transitoriness of life in an allegorical fashion. The dead in the book continue to exist – whether in heaven, in the afterlife or in the crypt. Only when there is no one left to remember them, they finally fall to dust.

As this is the time of the year when the living members of the Rojas family commemorate their beloved deceased, one may not be astonished to meet the 170-year-old mask carver again, skeletonized but otherwise safe and sound. He cheerfully enters stage to celebrate this day amongst the other dead of the family.(By the way, José Guadalupe Rojas and Ernest Salu I. (1846 -1923) are almost of the same age.)
However, the worlds of the living and of the dead in ‘Polvo’ remain separated. We accompany the living Rojas to the Mexican market and to their traditional kitchen; we witness them at the altar of the dead and during the night watch on the cemetery. And we thereby are introduced to a spirited form of memorial culture. It may sound paradoxical, but in ‘Polvo’, the dark medieval motif of the Dance of the Dead becomes an expression of pure lust for life. 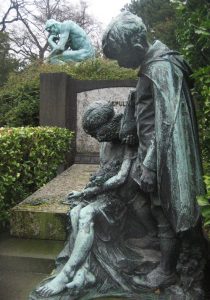 Grave on the cemetery of Laken

About Epitaaf:
Epitaaf (‘Epitaph’) is a Belgian non-profit association which promotes the preservation and study of funerary culture, and, more in particular, of historical cemeteries and tombs. 25 years ago, a group of people excited by the beauty of cemeteries, but evenly concerned about the sad state of most of these ‘cities of the dead’, decided to fund an association dedicated to these special but vulnerable places. A short time after, Epitaaf was able to establish itself in the ‘Ateliers Salu’. This former workshop of a family of sculptors specialized in grave monuments is situated next to ‘Le cimetière de Laeken’, one of the most important cemeteries of Brussels (and Belgium). Since then, most of the energy and funds have been used to restore this unique site and preserve the objects – reliefs, sculptures, archives, funerary decoration etc. – in the best possible way.
Epitaaf organizes exhibitions and guided tours on cemeteries (and through the workshop) and frequently publishes a magazine for members of the association. Some of the members of its board – art historians, architects, photographers, journalists etc. – are experts in the history and culture of cemeteries and are often asked for advice by public institutions, the media or private persons. The ultimate aim of Epitaaf is to establish a museum and documentation centre on funerary art in the ‘Ateliers Salu’. Epitaaf is a member of the Association of Significant Cemeteries of Europe and supported by the ‘Vlaamse Gemeenschapscommissie’ (Flemish Community in Brussels).

The original drawings of ‘Polvo’ at Epitaaf 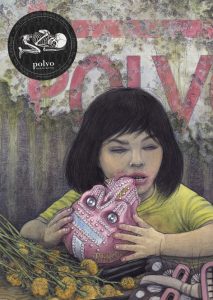 Cover ‘Polvo – Day of the Dead’