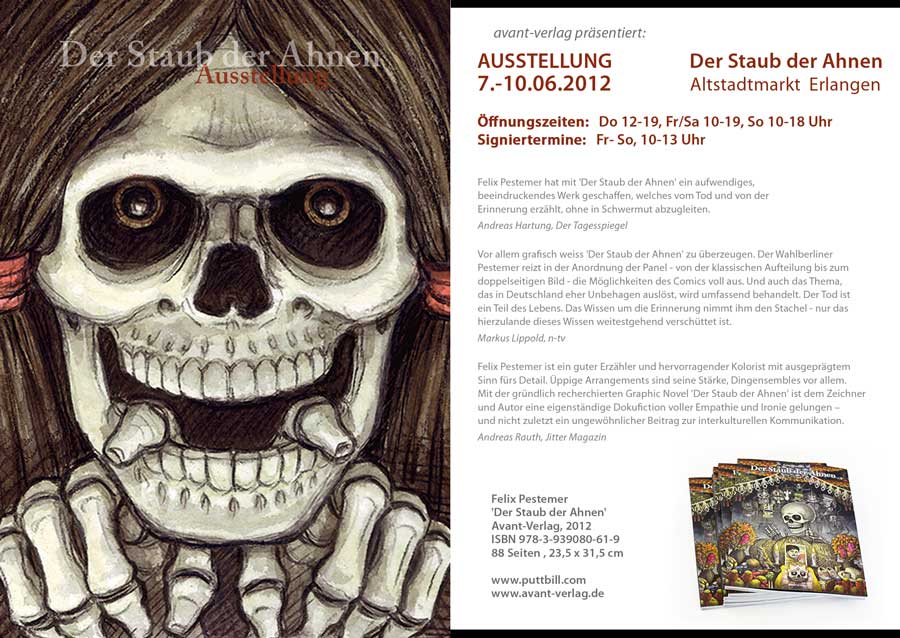 The Mexican “Day of the Dead” was declared World Cultural Heritage. The album ‘Der Staub der Ahnen’ (‘Dust of the Ancestors’) (Best comic album in German language) by the comics artist Felix Pestemer from Berlin that is nominated for the “Max und Moritz”-Prize 2012 fully lives in the cheerfully morbid atmosphere of this holiday.

A comic debut? Definitely, but even more an update of Mexican popular art. Pestemer invokes Muralismo with his page layout. Role models such as José Posada or Diego Rivera are obvious. Narration is second to the painterly effects. Maya masks, skulls, church windows: Mexico’s idiosyncratic amalgam of cultures jumps out at the viewer from the pages of the album. They are designed with strong artistic will and step over the borders of the comics medium with their reflections on death and remembrance.

(Taken from: Herbert Heinzelmann Announcement of the exhibition on comic-salon.de)

Flyer for the exhibition at the Comic Salon Erlangen 2012