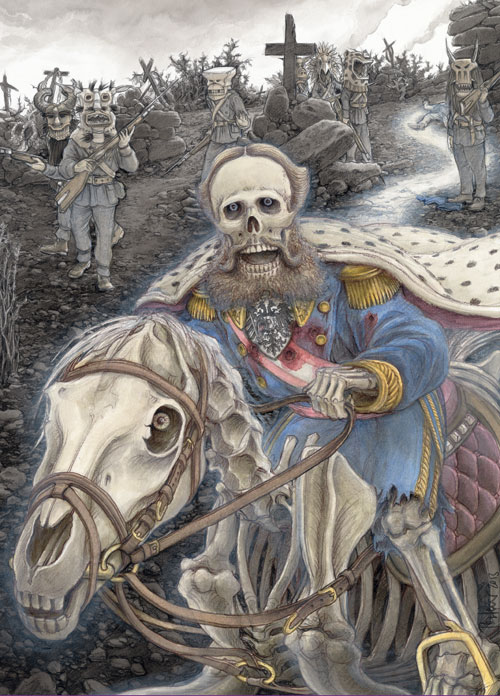 The Emperor of Mexico was Austrian

Felix Pestemer in the studio gallery of the KUNSTSAMMLUNG LINZ in the context of the NEXTCOMIC Festival 2013. 21 march to 20 april 2013

If we believe Eusebio Ramirez, a custodian at a mask museum in Mexico City and at the same time narrator of ‘The Dust of the Ancestors’, the dead keep on existing for as long as they are remembered. Only if they fall into oblivion, they crumble into dust. If that is true, Archduke Maximilian I of Austria, the Emperor of Mexico, must have “survived” his execution by firing squad on June 19, 1867, and still abides among us. 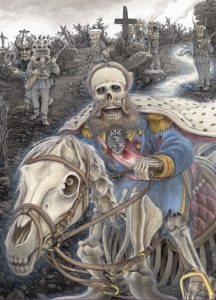 With ‘The Dusts of the Ancestors’ (avant-Verlag, 2012), the Berlin artist Felix Pestemer has created a sublimely illustrated graphic novel, for which he absorbed knowledge about customs, traditions, and folklore of the local population during several extended stays in Mexico over the years. The atmosphere of the Mexican culture of death, both cheerful and morbid, transcends the boundaries of the comic book medium by integrating reflections on death and memory. In addition to original graphics and objects, the exhibition, shown earlier at several other locations (e.g. the Museum for Sepulchral Culture Kassel), also exclusively presents the illustration of the defleshed Archduke Maximilian I of Austria.

Book signing hours of Felix Pestemer:
Friday, march 22nd, 3 and 6 P.M. at the booth of Pictopia