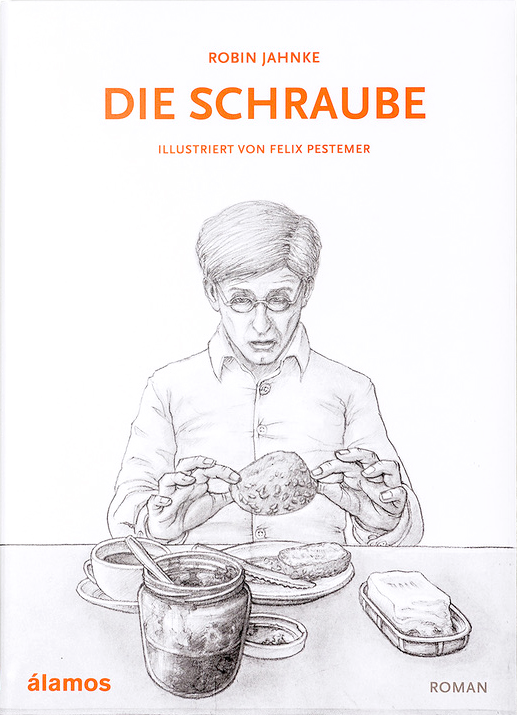 Planning, control, security – these are the (post-)Prussian virtues Hans Knirsch appears to embody better than anybody else. Yet, it only takes a tiny bit more than the departure of Hans’ spouse Helena to a health resort in order to dramatically alter his experience of the conditio germana. This tiny bit manifests itself in the form of a screw falling out of his nose. In analogy to his nasal emission, a deeply disturbed Hans begins to feel as out of place as the little piece of metal on his breakfast table. Knirsch subsequently loses control over his life and, thus becoming a plaything of coincidence, embarks on an aimless road trip through Germany. While problems are piling up around him, he imperceptibly closes in on the solution of his real conflict. 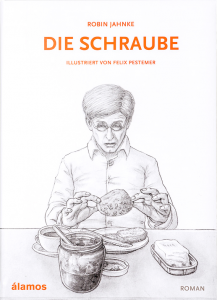 Robin Jahnke’s first novel is characterized by its lighthearted humor. If it was not for its setting under an overcast sky, ‘Die Schraube’ might pass off as a studio theater play. Jahnke sends his caricatures of essential German characters off into unexpected situations and develops – partly in page-long footnotes – a panorama of Germany which is strikingly precise in all its weirdness. The protagonists display a hodgepodge of human flaws: regarding their opposing characteristics and attitudes, compulsive Helena Knirsch can be considered the antagonist of Doro Schlüter, the latter a punk and chaos expert. In turn, the two female characters may be construed as two opposite poles of Hans’ inner life. Hans on the other hand is an open invitation for empathic embarrassment. He expertly fails in matters of his individual freedom, while tackling his own uncertainty with a virtue that presumably is the most typical among the German virtues: he functions. At least for as long as functioning functions. 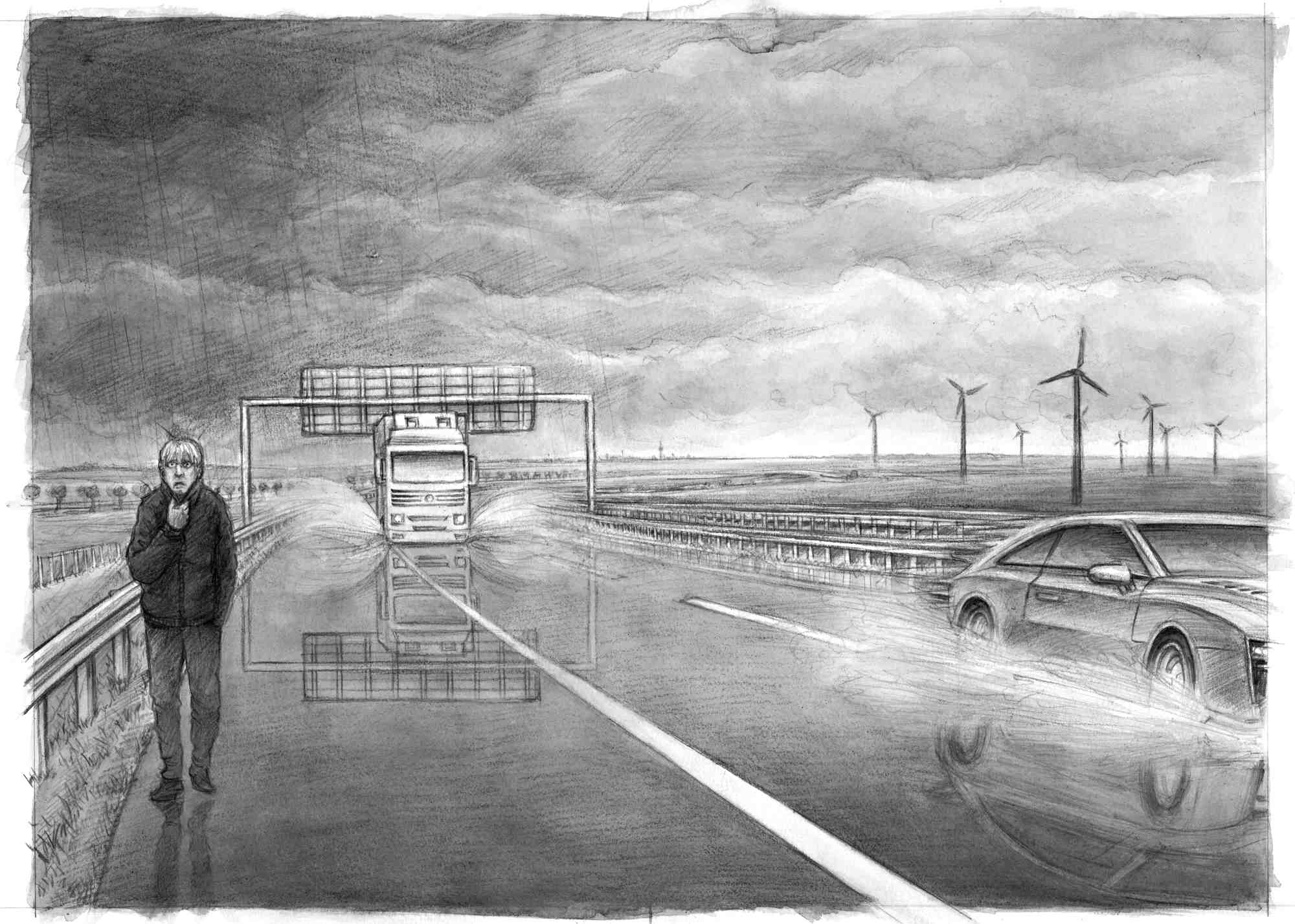 The interplay of image and text is truly unique in this novel. Immediately after drafting its plot, Jahnke began the collaboration with Berlin-based artist Felix Pestemer. The duo managed to congenially interweave the novel’s scenes with Pestemer’s numerous detailed drawings. These illustrations accomplish more than merely a visual exemplification of Jahnke’s prose, they generate meaning in additional narrative layers as they playfully offer interpretations, sometimes they even take the story further than the text initially did. This way, the novel with each page further condenses a world so grotesque it “could not be more realistic”, as the blurb puts it.

Designer Paul Bieri took care of the layout and is thus responsible for the book’s superb quality of print and production. The novel has been ordered as a contract work by Mexican publisher Lino Santacruz Moctezuma. He granted complete artistic license to Jahnke and Pestemer – as long as the novel would in the broadest sense represent their native country of Germany. For well over 15 years now, Santacruz has worked as a diplomat, spokesperson, editor, and not least as a patron of culture in Germany. In this vein, he looks upon the project as a contribution to the bilateral relations between the two countries. Jahnke’s and Pestemer’s approach of painting a picture of Germany inhabited by caricatures and satirized stereotypes puts a smirk on Santacruz’ face: “Typically German”. 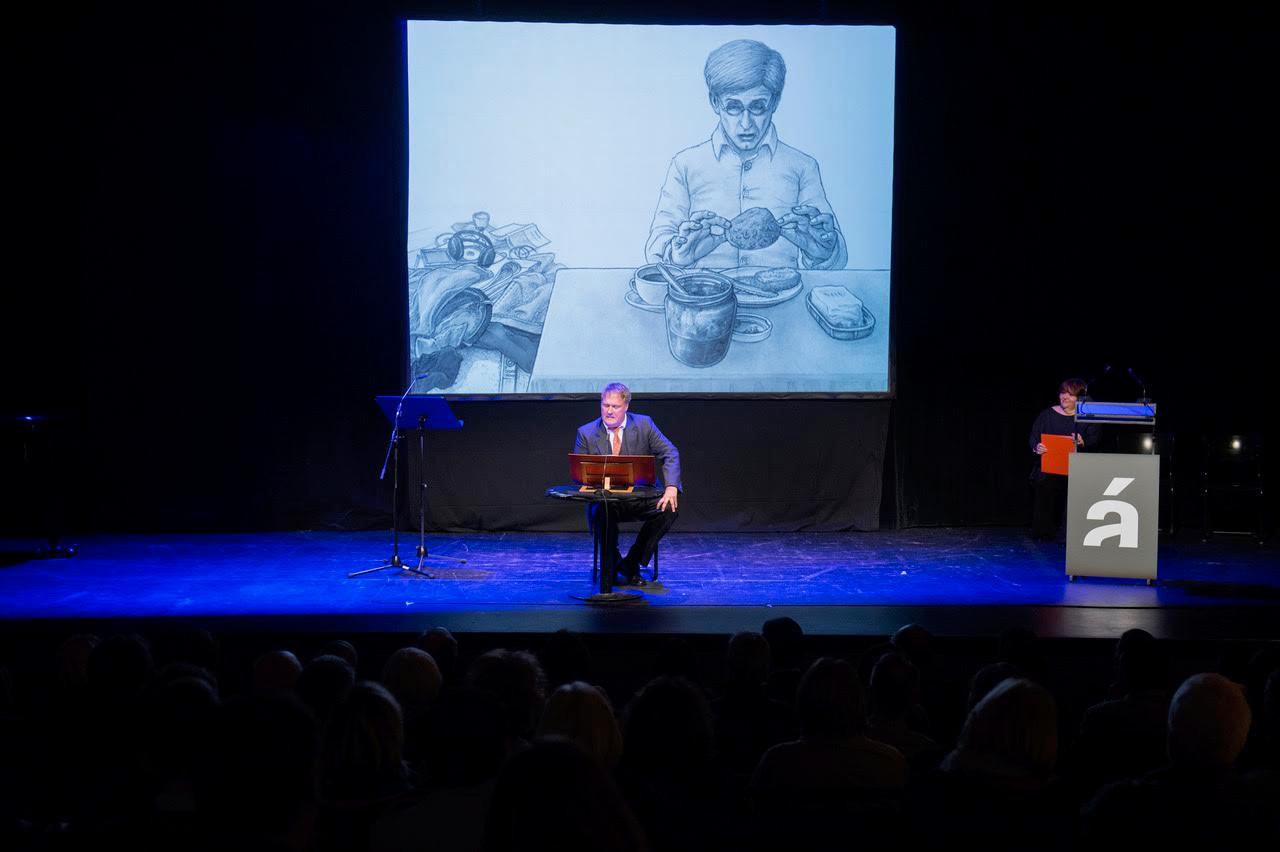 Christian Gaul reads from ‘Die Schraube’ at the book presentation in the Berliner Akademie der Künste/Academy of Arts, Berlin

The novel ‘Die Schraube’ has been published in November 2016 by newly established Álamos Publishing in both German and Spanish. An audiobook version of ‘Die Schraube’ is so far only available in German, read by actor and voice actor Christian Gaul. The novel has been created on the occasion of the Germany-Mexico-Year 2016-17, parallel to the collection of stories ‘Potsom’, a volume of twelve transcribed narratives of the indigenous peoples of Mexico.