Exhibition at the Museo de Arte Popular in Mexico City

It has been two years since the publication of ‘The Dust of the Ancestors’ and close to ten years since Felix Pestemer embarked on the creative voyage of this intricate graphic novel project. Now, the Berlin-based artist returns to the scene of inspiration for his comic volume about the Day of the Dead and Mexican everyday culture: the Museo de Arte Popular (MAP, Museum of Popular Art) in the heart of Mexico City. Here, on the occasion of the central public event Día de los Muertos, Pestemer’s opus is acknowledged in an extensive special exhibition.

What business does a German artist have in a Mexican museum for popular art?

Taking a stroll through the halls of the MAP, Pestemer’s graphic novel in hand, one might get an idea: dancing skeletons, masks, votive pictures, papercuttings, … Numerous illustrative details of the comic derive from the MAP’s collections and are thus inspired by opulent Mexican everyday culture. Precisely these minutiae lend the distinctive atmosphere to the tale of the living and the dead members of a family and their interrelations far beyond death, an atmosphere Felix Pestemer obviously feels at ease with. For him, ‘The Dust of the Ancestors’ constitutes an homage to Mexico’s cultural heritage and popular art.

So far, the large-format original drawings had been on display within nine exhibitions in Europe. Exhibition number ten is the MAP special exhibition ‘El polvo de los antepasados – Una novela gráfica sobre la muerte en México’, and many exhibits will be shown for the first time. Aside from more than 50 original drawings, sketchbooks and a wealth of source material, the animated film ‘Peyotl’ will premiere. Motion graphic artist Max von Bock has animated panels from the rousing finale of ‘The Dust of the Ancestors’ – a psychedelic trip which sweeps the reader away to purgatory via the Aztec Empire. ‘Peyotl’ is provided with sound and intense electronic music by Tim Kroker. Voice actors Lino Santacruz Moctezuma and Fabián García Herrera play the parts of protagonists Don Reyes and Juanito.

Not only does the exhibition catalog offer the entire graphic novel in Mexican Spanish, but also a detailed essay by co-curator Jurek Sehrt on Mexican mortuary cult and syncretism of indigenous religions and catholicism as sources of artistic inspiration. A variety of Pestemer’s graphic works and posters from previous exhibitions serve to further illustrate the text. These objects reveal how deeply the imagery surrounding the Day of the Dead has enthralled the artist, in an intensity which impacts his work beyond the graphic novel. In Pestemer’s work, the substantial symbolism of magic realism is celebrated and caricatured at the same time. Pithy motives are reinterpreted through juxtaposition with absurd artefacts or deconstructed through morbidity of setting.

Yet another highlight awaits to be discovered, since the selection of originals displayed has been expanded for the occasion: only meters away from the museum, Diego Rivera’s famous mural Sueño de una tarde dominical en la Alameda Central is on display. Amidst the crowd of people depicted in the wall painting, we recognize one of the protagonists of ‘The Dust of the Ancestors’: a little girl by the name of Dolores and her doll. In the novel – in the course of a game of hide-and-seek in the adjacent ‘Parque de la Alameda Central’ – she makes her way through precisely this gathering. When comparing the sequences of the comic and Rivera’s painting, one realizes that mere seconds have passed between the respective scenes. (In fact, Rivera has a cameo appearance in the graphic novel, where in a flashback to the year 1937, we witness the painter courting actress Maria Félix, while Diego’s wife Frida Kahlo treats herself to a furtive tête-à-tête with expatriate Leo Trotzki).

References and tributes in this vein continue throughout the novel: places, people, historical facts, traditions and objects from different eras and regions of Mexico become interwoven with the fictional narrative. Felix Pestemer has completed a thorough research job before allowing himself a maximum of artistic license. For its Mexican visitors, the exhibition hence gives the opportunity to view the long-familiar, seen through a stranger’s eyes, in a completely new light. 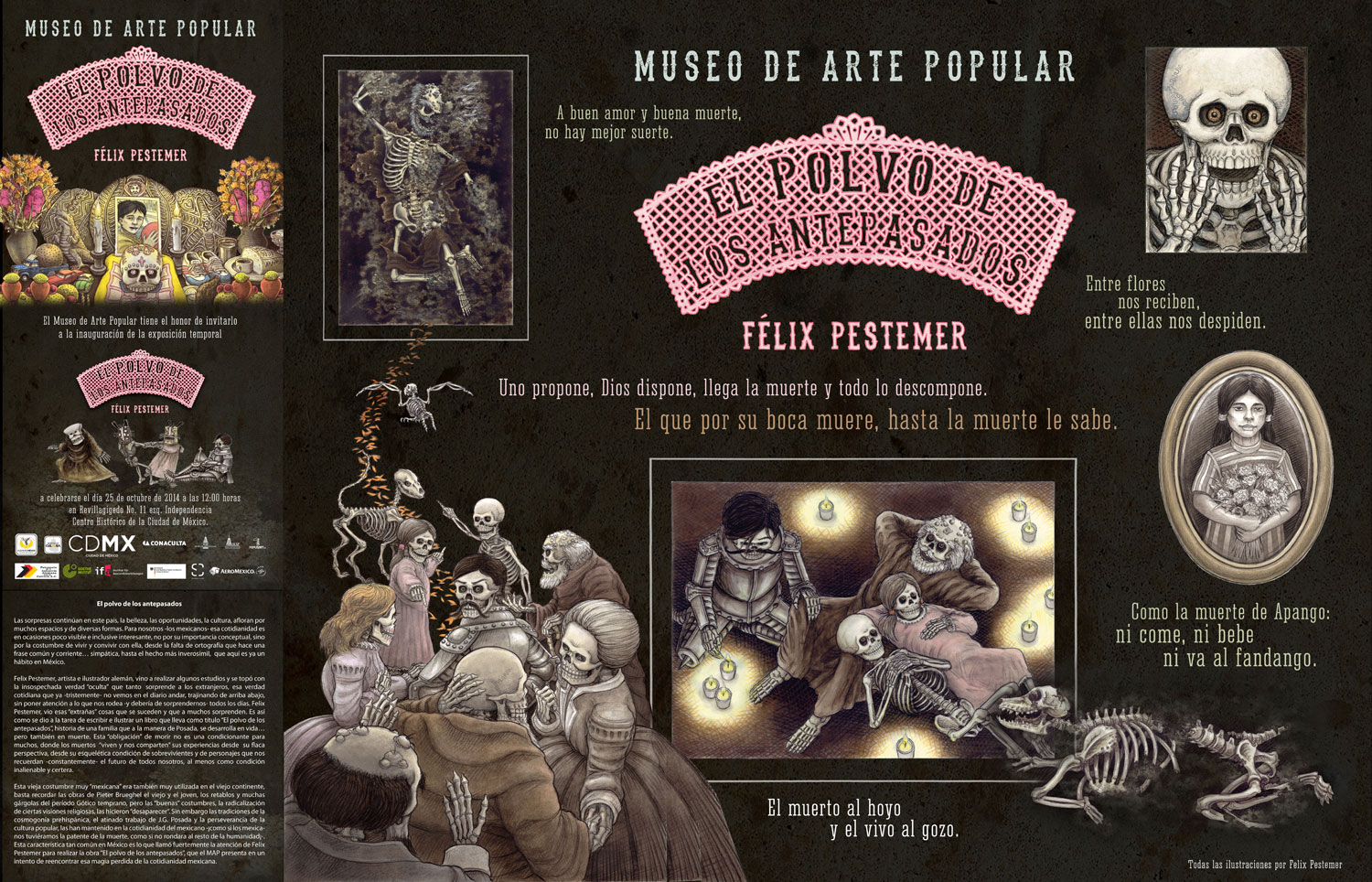 Poster for the exhibition in the Museo de Arte Popular in the Mexico City Metro (Layout: Alberto Palacios)