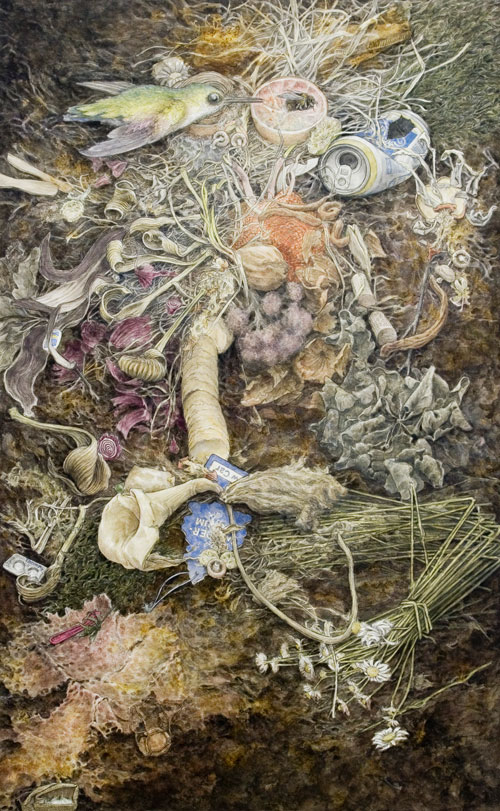 Exhibition “Ein Leben lang” (“All your life”) at the NGBK Berlin

In mid-summer, on July 25th, 2008, around 7 p.m., the exhibition “Ein Leben lang” (“All your life”) opens at the Neue Gesellschaft für Bildende Kunst (New Society for Visual Arts, NGBK). The artistic works address the issue of the lifelong process of aging.

Here is a statement by Felix Pestemer on ‘Find Spot of the Horticulturist’s Grave (Rotten Arcimboldo)’, his own submission to the exhibition:

In his lifetime, Arcimboldo (1527-1593) missed out on the opportunity to relinquish his own lavish portraits, consisting of fruits and flowers, to decay. Maybe he was just glad that the dark times of the Late Middle 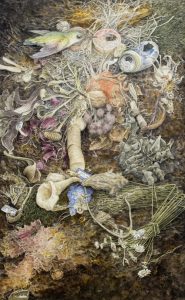 Ages, marked by the Black Death and recurring famines, were finally over and he had huge fun in capturing Vertumnus, the Roman god of transition and change, on his canvasses for all posterity. Not to belittle his Mannerist style, but as far as transition and change are concerned, his work leaves much to be desired. Had he been consequent, the end result (or even the starting point) of his works should have been decay and decomposition of every form, color, and structure, meaning entropy and soil. But Arcimboldo never composted the horticulturist. He died shortly before the vanitas still lifes with their allegoric objects and symbols of impermanence became popular during the Baroque period.

When I was recently (2008) walking past a pile of trash, something made me stop. With a slight premonition, I circled the waste to have a close look at it from all sides, yet I failed to notice anything special. However, I was precautious enough to take a photo of it in case I had overlooked something that would later catch my eye – when suddenly a hummingbird appeared out of thin air, chasing a bumblebee. Thunderstruck I stared at the display of the camera: There it was – the grave of the horticulturist!